GV Summit: Day One a Success!

The first day of the Global Voices 2008 Summit in Budapest, Hungary was a wild success, as far as we can see (obviously we can't know all of the implications this early in the game). The morning started with an introduction from Ethan Zuckerman and Rebecca MacKinnon, founders of Global Voices, during which they acknowledged the many sponsors and friends of the Global Voices Summit. Of particular note, they thanked Georgia Popplewell, Managing Director of GV and major guiding force of the Summit. Rebecca explained the impetus behind GV:

I came from journalism, Ethan from non-profits; we both shared concern about the media and global attention flows. I saw the international English-language media focusing a lot of attention on certain people and places, and less attention on other voices and places. Ethan was doing a lot of research on media attention patterns. We were studying the blogosphere and wanted to talk about all the people around the world who were starting to blog.

Session 2 was liveblogged by Juliana Rotich. Mary Joyce moderated; Ory Okolloh of Kenya, Wael Abbas of Egypt, Amine of Morocco, Oiwan Lam of hong Kong, Au Wai “Alex” Pang of Singapore, and Hamid Tehrani of Iran spoke on the subject “Citizen Media and Online Free Speech.” Issues broached during the discussion were the use of twitter, proxies and SMS to get around internet filtering and censorship. Each panelist shared stories of recent events from their countries.

Jillian York liveblogged Session 3, entitled “Living with Censorship.” Awab Alvi of Don't Block the Blog moderated, whilst Helmi Noman, CJ Hinke, Andrew Heavens, Rezwan, Yazan Badran, and John Kennedy were panelists. Each panelist discussed what it's like to live with censorship, and each had a different perspective on the issue. What criteria should you look for when choosing circumvention & anonymizing tools? This is important because some tools that you can use now may not be safe to use in future. Google may be good now, but as it continues to grow, will it remain so?

The features you want…
-You want a tool that is well funded. Rebecca MacKinnon spoke at the very end of the panel, discussing censorship as a legal, political and social program:

Without the social layer on top of the technical and legal solutions, a lot of these problems are going to be difficult to solve. I was really struck by stories about social demoralization and isolation that some bloggers feel.

She added that we as citizens need to work together to get past censorship and focus on what we can do, rather than what we canâ€™t. To conclude, she also mentioned how censorship can have a landslide effect, for example: Japanâ€™s freedom of speech/anti-pornography censorship stance could be used as an example by China to subdue its activists and dissenters. Day 2 promises to be just as incredible, with Rising Voices, GV Lingua, and other topics. 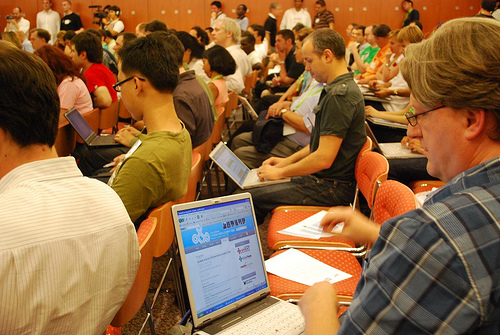